Ever needed to know what your name would be in the Starwars universe?  Me neither, but that didn't stop me creating this site to help you find out.

I've been playing with RSS feeds in JavaScript.  My first attempt is a webpage that shows the top BBC news stories; provides a Google search box and, rather uselessly displays the current day of the week.  I shall continue to work on it in an attempt to make a rather useful homepage.  Please take the code and give it to children to hack.  Have fun.  Oh, and a link to the jQuery RSS feedreader code I used. 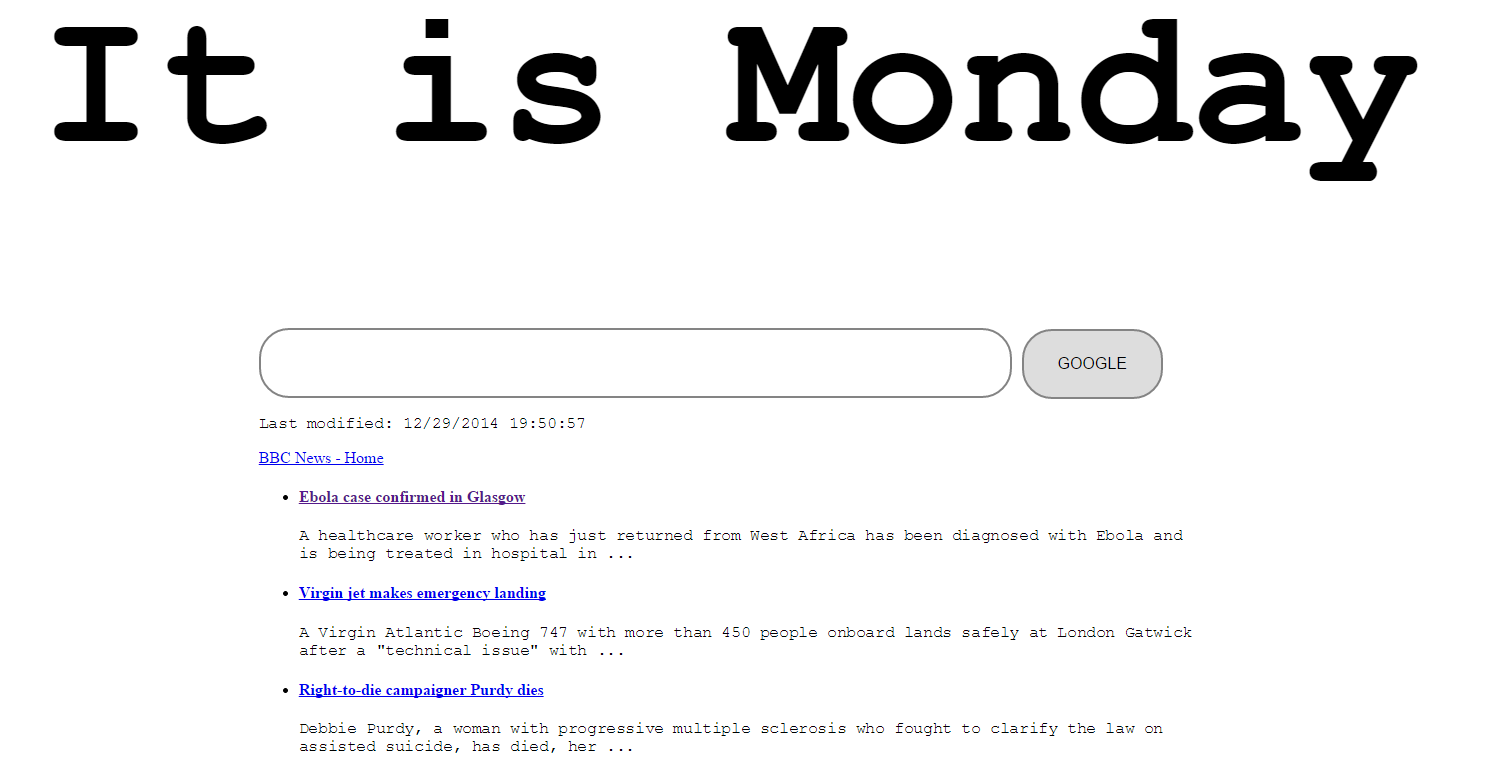 This is a post for anyone who remembers a time before The Web, when the height of digital entertainment was the one-kilobyte-per-page, primary-coloured block-graphics wonderland that was teletext (lower-case t).  If you are still awake, and remember the joy of the Bamboozle quiz on Channel 4's Teletext (caps T) - then read on!

I was delighted to discover the Teletext Preservation Project, an attempt to archive some of the many pages from the UK teletext providers (BBC's "Ceefax", C4's "Teletext" and ITV's Oracle - which I was also delighted to discover is an acronym for Optional Reception of Announcements by Coded Line Electronics).  I have shamelessly stolen some images from the TPP for use in this post.


Other notable websites keeping teletext alive include The Teletext Museum (this link showing how the events of the 11th September 2001 were reported) and Alan Pemberton's website (an informative history of the subject).

A new Christmas tradition in my house: - LEGO competition!  Each competitor is given 16 ounces (454g) of randomly assorted LEGO bricks, and 60 minutes to build the most awesome thing.  Here are some of the best from this year's competition:

My LEGO advent calendar is complete

Have a very metal Christmas

Dear readers, wishing you a very metal Christmas...you'll go down in his-tor-raAAGHAAAAAAY!

A collection of videos showing programs written in BBC BASIC for Windows.  Also I discovered the following BB4Win facebook group.


A software simulation of the BBC One World Logo (OWL), otherwise known as the Computer Originated World (COW), rendered in real-time using Direct3D on a Windows PC by Richard Russell

This is a simulation of a novelty Ball Bearing Clock, made using BBC BASIC for Windows and the Box2D physics engine. You read the time from the bottom to the top: hours, minutes tens, minutes units, seconds tens, seconds units; it starts at five to twelve


A load of games written in BBC BASIC for Windows by various people.


Optical illusion by dw1664 (Creator of the gfxlib)

A selection of BBC Microcomputer video games, from a time when games were so difficult, you did not complete them. 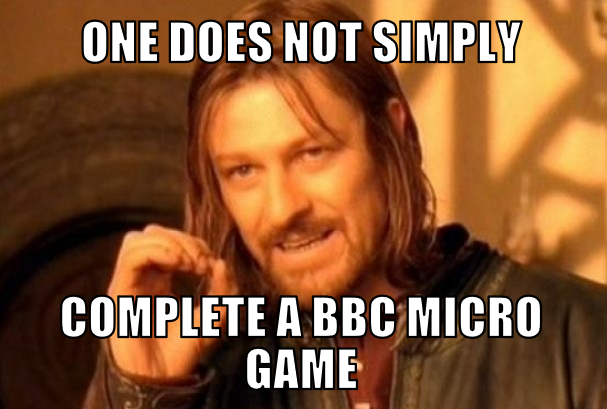 Thrust - a lesson in Physics, from the time when computer games were difficult.
"Probably the most challenging game for the BBC Micro" - so much so that Micro power offered cash prizes to anyone who finished it. I had a primary school teacher who was awesome (and forward thinking) enough to let us play this game ad nauseum. Never managed to complete it.
Repton - one of the greatest BBC Micro games I never owned, not that I would have completed it if I did.
The game that changed everything. Elite -the first truly 3D game. This video shows the game being played on vintage hardware. This was a true revolution in gaming. For the first time you were not limited by three lives with levels speeding up as you progress until it becomes impossible to play. Elite immersed you in a vast sandbox universe. I lost countless Friday nights as a young teen exploring the many alien worlds and battling the Thargoids and I never did manage to make it to the status of 'Elite'.  It is so good, we might do a whole series of posts on it. I wonder how many people are now spending countless nights playing Elite: Dangerous?
"We are the Arcadians" they taunted at the start of every battle. Great stuff! A fantastic version of Space Invaders for the BBC Micro. Impossible to complete, the arcadians just came at you faster and faster...
Exile - a fine example of one of the excellent adventure games for the BBC microcomputer. Did someone say 32K?
A mind-boggling and difficult adventure game featuring teleports, platforms and various beasties we came to expect from Acornsoft computer games.
Ricochet - excellent graphics and a wonderful gameplay made this game a firm favourite. I forget the name of the protagonist in this adventure, however I do remember that the aim of the game was to bounce your way through four different worlds looking for pieces of the thingy you needed to complete the game. It was a truly fiendishly difficult game, and suffice to say, I never completed it.
Baron. One of my favourite beeb games because it kind of felt like a sequel to Castle Quest. I later found out that Baron was written in a hurry to fill up space on the Acornsoft's "Play it Again Sam 11" compilation. It is not actually possible to complete this game, although I stand ready to be corrected.

Chuckie Egg. It is not possible to win, just survive longer than last time. Eventually the big yellow bird in the cage is released. If you survive that, his little blue buddies team up and kill you. Even so, this is probably one of the best games ever. They don't make games like this anymore.
Pipeline - an ingenious game with great graphics, complex puzzles and cool soundtrack. Pipeline also game with a level editor and graphics editor allowing you to spend literally days tinkering with your own levels and puzzles. One of the most memorable features of pipeline was the maze of pipes that one would enter and inevitably become hopelessly lost within...
White Magic 2 - a rogue like monster-slaying game for the beeb. This one had a level editor which was more fun than the actual game.
Ravenskull - "


All of these games, and more, are available to play on the wonderful BeebEm emulator by David Gilbert.

I have started curating a list of fun browser-based games. Most are either HTML or flash. More will be added over time.


Clearly the best so far. Apparently over 600 hours of work has gone into this. Be prepared to say: 'WOW', then 'WOW!', then 'OH MY GOD, WOW!!'
Another good one. Video gets more awesomer as it goes.
Close up of awesome LEGO marble run
If only I had these toys...
Another fantastic piece of work, this time a 9V powered marble run, with human loader.

Marble train. Someday our cities will look like this
Saving the best till last - a new world record...

This shall be the last post in our series on writing an adventure game in BB4W.   Posts are getting rather long, and it really is over to you to complete the game now.  If you want an example of a more complicated adventure game engine, then do check out GOLIATH.

In this edit, we have added a procedure for allowing the apple in the woods to constantly grow back once it has been eaten (ultimately preventing the player from starving to death forever).  I've also added a cake object as a special gift for all my readers - enjoy!

DEFPROC_executeCommand( command$ )     REM deals with the users input
LOCAL com$, gridError$     LOCAL ok% : REM checks whether the user's input is acceptable
ok% = TRUE : REM assume user's input makes sense
gridError$ = "You can't go in that direction!" : REM a message for when you move off the grid
com$ = FN_convlc( command$ ) : REM convert to lowercase so it is easier

REM if the user's input was acceptable, then they have
REM made one 'turn' and should lose one health point
IF ok% THEN
health% -= 1     ENDIF

Following the earlier post on picking up and dropping objects, we shall now look at creating objects that can be eaten (or not!).  Let's ring the changes...


In order to distinguish between edible and non-edible objects (unless you want your player to eat their own sword!) we need to set up a new array to record whether each object is edible or not.  We shall use -1 to mean 'is edible' (-1 evaluates as TRUE in BB4W), and zero to indicate not edible.


We now need to modify the porcedure that creates objects to that it reads in the new object data.  Here you can see that we have set the apple to be edible (-1) and the sword to not be edible (0).


We have added a new procedure - PROC_eatObject() to deal with the player eating an object.  It works as follows:

Next time: the apple's grow back!

DEFPROC_executeCommand( command$ )
REM deals with the users input
LOCAL com$, gridError$
LOCAL ok% : REM checks whether the user's input is acceptable
ok% = TRUE : REM assume user's input makes sense
gridError$ = "You can't go in that direction!" : REM a message for when you move off the grid
com$ = FN_convlc( command$ ) : REM convert to lowercase so it is easier

REM if the user's input was acceptable, then they have
REM made one 'turn' and should lose one health point
IF ok% THEN
health% -= 1
ENDIF


DEFPROC_showObjects
REM look for any objects here
LOCAL n%
REM look through list of objects
FOR n% = 1 TO numObjects%
REM is the player's location the same as the object location?
IF x% = objectx%(n%) AND y% = objecty%(n%) THEN
REM objects is here
PRINT "There is "prefix$(n%)" "object$(n%)" here."
ENDIF
NEXT
ENDPROC


DEFPROC_getObject( this$ )
REM allows player to pick up objects
LOCAL n%, found%, index%
LOCAL objectError$ : objectError$ = "I don't see one of those here!"
WHILE n% <=numObjects% AND NOT found%
IF this$ = object$(n%) THEN
found% = TRUE
index% = n%
ELSE
n% += 1
ENDIF
ENDWHILE
:
IF found% THEN
REM check that the object is at the player's location
IF x% = objectx%(index%) AND y% = objecty%(index%) THEN
REM object is here, so pick it up
playerObject%(index%) = TRUE : REM add to list of player's objects
objectx%(index%) = -1 : REM remove object from the grid
objecty%(index%) = -1 : REM remove object from the grid
PRINT "OK, you take "prefix$(index%)" "object$(index%)
ELSE
PRINT objectError$
ENDIF
ELSE
PRINT objectError$
ENDIF
ENDPROC

DEFPROC_dropObject( this$ )
REM allows player to drop objects
LOCAL n%, found%, index%
LOCAL objectError$ : objectError$ = "You are not carrying one of those!"
WHILE n% <=numObjects% AND NOT found%
IF this$ = object$(n%) THEN
found% = TRUE
index% = n%
ELSE
n% += 1
ENDIF
ENDWHILE
:
IF found% THEN
REM check that the player has the object
IF playerObject%(index%) THEN
REM player has one so can drop it
playerObject%(index%) = FALSE : REM remove from list of player's objects
objectx%(index%) = x% : REM add object to the grid
objecty%(index%) = y% : REM add object to the grid
PRINT "OK, you drop "prefix$(index%)" "object$(index%)
ELSE
PRINT objectError$
ENDIF
ELSE
PRINT objectError$
ENDIF
ENDPROC


DEFPROC_eatObject( this$ )
REM allows player to eat objects
LOCAL n%, found%, index%
LOCAL healthBonus% : healthBonus% = 10 : REM health gained from eating things
LOCAL objectError$ : objectError$ = "You are not carrying one of those!"
WHILE n% <=numObjects% AND NOT found%
IF this$ = object$(n%) THEN
found% = TRUE
index% = n%
ELSE
n% += 1
ENDIF
ENDWHILE
:
IF found% THEN
REM check that the player has the object
IF playerObject%(index%) THEN
REM player has one so can try to eat it
REM check whether the object is edible
IF edible%(index%) THEN
REM object is the apple
playerObject%(index%) = FALSE : REM remove from list of player's objects
objectx%(index%) = -1 : REM remove object from the grid
objecty%(index%) = -1 : REM remove object from the grid
PRINT "OK, you eat "prefix$(index%)" "object$(index%)
health% += healthBonus%
PRINT "You gain "STR$(healthBonus%)" health points!"
ELSE
PRINT "I'm not eating one of those!"
ENDIF
ELSE
PRINT objectError$
ENDIF
ELSE
PRINT objectError$
ENDIF
ENDPROC