A levidrome is a word that when spelled backwards makes another word.

Well, at least not yet. It is not in the Oxford English Dictionary.

Levi Budd is a six-year-old boy from British Columbia in Canada who has coined the term 'levidrome' after spotting that the word 'STOP' spells 'POTS' backwards. After realising that there is no such word in English for this phenomena, a social media campaign has started to get this word in popular usage (hence this post).

I wrote a short Python script this morning that will pull all of the levidromes from a dictionary file. The full list is copied below.

It is interesting to note that some levidromes are also palindromes. I wonder whether we need a new word to describe this phenomenon also?  Furthermore, there is no word in English for "a word that you make up in order to make another word make sense". I suggest: "emordivel" ?

The worst game I've played in a long while

I was going to call this post "Is this the worst game ever?", but it sounded like click-bait.

Dig Station is a game for Android. The blurb states:

"Manage little station on the alien planet. Get upgrades and go for adventures!".


It sounded fun, but one of those statements is a lie.

You start the game with a little dig station, and after a short period of familiarising yourself with the controls (there is no tutorial) you discover the main mechanic of this game - the counter in the top right indicates how much stuff your station has gathered. Soon you discover that you have to upgrade your main drill. Doing so increases the rate at which you get stuff. Everyone likes games where you get progressively better, even if it is just the rate at which you gain yellow numbers, right?


Once you have gathered 2000 'thingies' you get to further upgrades to your little station, such as hull, hydraulics, electronics, etc. The names matter little: each one does nothing but increases the rate at which you can mine 'wotsits', and by this stage you are craving ever more and more of their yellowy, numerical goodness.

After a short while you discover that this game is going to reward you for interacting with it in various ways. Soon you have devoted your entire evening to clicking the upgrade buttons rewarded each time by the counter of 'thingy-jigs' spinning over faster and faster.

After a while you have become a junky to collecting yellow numbers. You need ever higher orders of magnitude for the next upgrade and so you devote even more of your time to gathering the yellow 'somethings' required by the game. You discover that you can increase the productivity of your station through a number of ways. For example, 'click this button one hundred times and you increase the productivity by 1%'. So you do it. You actually spend the next two or three hours of your life pressing a button hundreds of times to get incrementally faster rates of 'whatchamacallits'.

The developers lied. There is no pay off. No reward.

They promised 'adventure', but there was none. The game has no challenge to it at all. You simply progress through the game by giving it more and more of your time.

Eventually you have gathered an arbitrarily large amount of yellow 'numbers' and the game gives you the option of progressing to the adventure. So you do... 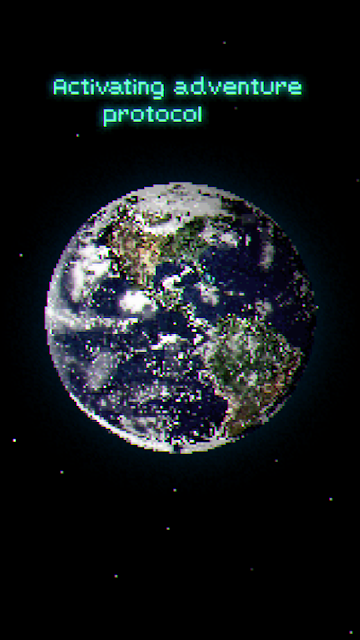 ... but first you have to press a button one hundred times.... 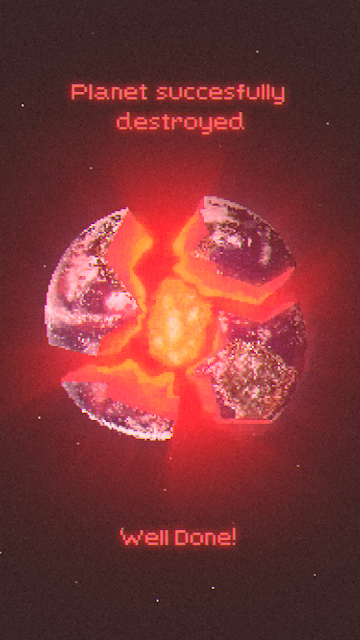 Then the planet explodes. GAME OVER.

You do not even get a chance to continuing playing some more, nor start over. And worst of all, the 'adventure' you were promised from the start does not occur. the game just...stops.

I was left with a feeling of loss for the several hours of my life I had dedicated to clicking buttons on my screen for what turned out to be simply a vehicle for adverts.

This game is click-bait. Literally and figuratively.

It isn't the worst game ever. The graphics have a lovely retro feel and if you really want to waste four or five hours of your life, then there are worse ways, but the developers have been disingenuous in their description. I can't help but feel disappointed and fail to see the funny side of the time wasted.

If you want to play a good 'clicker' - one that rewards you with challenging puzzles and a real sense of the game developing, then do try Candy Box if it still exists. For a great 'digger' game with a rewarding end (and the ability to carry on doing what you want even when the game ends) then check out Motherload on miniclips.

That's all for now. Rant is over, but if you are still will us, then you might want to read about that time I found Usbourne's book of Computer space games from the 80's; or you may be in the mood to waste your time in a fun and rewarding way.

Can I look after a goldfish?

The short answer is no. Good bye!

Still here? Oh, well, you see I would love to look after a living creature, but unfortunately I would be a bad parent. I would forget to feed it, or neglect its little tank and turn its environment into a dank, poisonous and murky abyss even worse than Darlington. With this self-realisation comes wisdom though, for now I seek my animal companionship through virtual pets.

My current favourite is iQuarium by Infinite Dreams for Android.

This is a really beautiful app. The fish looks very lifelike and the developers have clearly spent a lot of time making the fish move like a real animal. Unlike in many virtual pet apps, there are no gimmicks. You simply have to remember to feed your fish each day and that's it. There are no daft games to play to increase its 'happyness', and no muck to clear out. Each day you just get to watch your fish swimming around its virtual world. It is very relaxing.

The way you treat your fish will affect its personality, apparently. I do not know if this is true, or not, because so far I have been treating my fish very well. John is a seemingly happy and well-adjusted four-week old fish.

You can interact with your pet. If you press on your screen he will follow your finger. If you tap him he will turn and stare at you. Other than that, your fish is its own person and will do its own thing.

The longer you keep your fish, the more points you score. Various new artifacts, plants and backgrounds are available the longer you play.

If you are looking for a realistic fish simulator with no gimmicks then to look at iQuarium for Android. It is a shame that there is no Windows 10 version though.

If you are still here, then you might like to read all about that time I was the god of my own planet, or have a look at my other virtual pet posts.

Candy from PearlMountain got in touch recently and asked me to do a review of DesignEvo. I don't often get asked to review software. I prefer to showcase stuff I find interesting as and when I find it myself, but Candy asked nicely, so here we go.

DesignEvo is a very easy to use tool for creating vector logos. After a brief tutorial you are deposited on a blank 500 x 500 canvas with three tabs one the left hand side. Candy promises me professional looking logos in seconds and she doesn't disappoint.


There are three main elements to your design: Icons, text and shapes. These can then be freely arranged on your canvas. I had a go at creating a new logo for HaveSpellWillTravel. I started my stop watch at the end of the tutorial and I had produced the following design after 48 seconds.

Some really nice features include:

Our review summary: This is a really easy to use tool that would be perfect for school projects.

Our rating: 5/5 and +1 Geek Experience Point for PearlMountain.