My car recently broke down leaving me stranded and awaiting recovery. Following a freezing cold wait by the side of the road (for two and a half hours) I was picked up and the car and I were taken to the nearest car dealership, which just happened to be where I bought the car from in the first place. Following a heated discussion I was finally supplied with a courtesy car.

So I found myself driving an unfamiliar Hyundai with a bare trickle of petrol in the tank. I promptly went to the nearest petrol station to fill up (my American colleagues call it 'gaaas'). As I joined the queue I was hit by the sudden panicked thought that I did not know which side the petrol cap was located.

Rather than trying to peer out of the window to see if the cap was indeed behind me on the driver's side, or jump out into the cold and run around the car looking like a fool, I remembered a rumour I had heard that the dashboard of modern cars indicate the location of the petrol cap.

Look for the little arrow on you dashboard located near the petrol gauge. The arrow indicates the position of the cap. Here it is pointing left, so the cap is on the passenger side.

The other arrow in this image shows an estimate of the number of miles I can travel before requiring another top-up. This is only an estimate, and it is fun watching the number change as your fuel efficiency changes. You will get more miles to the gallon when travelling at a constant cruising speed in fifth gear than when idling in city traffic.

My American or European readers might be surprised to discover that here in Britain we drive on the left (by which I mean the 'right' or 'correct' side of the road).  Why is the left the best side of the road to drive?  The number one reason that reason on the left-hand side of the road is perfect for the right-handed driver is that it keeps your strongest arm on the wheel freeing your weaker arm to operate the gears/hand brake/entertainment system. This allows you to be more responsive when making unexpected maneuvers.

Don't believe me? You just need to look at road-traffic deaths by country. Countries that drive on the left have fewer fatal accidents.

Simply because I found myself needing to work out the log of base 2 for a series of numbers whilst studying and comparing several 'divide and conquer' algorithms, I decided to write a simple log of base 2 calculator. You can try it by following the link below.


As you can see from the screenshot, the applet keeps a record of all of your calculations until you refresh the page and the results are returned with 15 decimal places accuracy.

Stuff I use my microcomputer for #01 Chess

Avid readers of this blog will be well aware that I am a retro computer hobbyist, with my favourite machines being those produced by Acorn in the 1980s. You see, the 1980s were not only the days of Rubik's Cube, Ghostbusters, Tiffany, dreadful fashion and Margret Thatcher (oh, I've made myself sad) - for the 80s was also the time of the BBC microcomputer (yay, happy again!).

So, I've decided to start a series of posts about what I still use my BBC microcomputer for. Or, at the very least, a series of things that I would like to do more of.

Acornsoft Chess is a pretty decent chess program, all things considered. It features all legal chess moves including en passant and minor promotions. Moves are entered using pure coordinates, as shown in the image above. The software also has and 'edit' mode to explore different game positions and solve 'mate in two' type puzzles. Most importantly for the game's longevity is a 'save' feature, because leaving a microcomputer switched on permanently is not really an option.

There are ten levels of play, and as I consider myself to be of fairly average ability I have recently moved up to level 5, and as you can see from the image I am holding my own in this epic three-hour battle.

Acornsoft chess is not as speedy as a modern implementation, but this matters not because, for one thing, what do you expect from a 6502 processor with 32K RAM? The other thing is it is about as fast, if not better than an average game of online postal chess.

Well, that's it for today on pre-Internet Chess. I also play on Chess Time, so any readers who want to challenge me, my user name is superdecade and my current chess rating is 'very poor'. Please, if you do send me a challenge, keep the move limit four days or longer.

Well, must dash, it's my move.

New update to Have Spell Will Travel

Today I have pushed out a new update to my adventure game Have Spell Will Travel.

If you don't know Have Spell Will Travel, it is a game of luck, skill and fantasy questing. You take control of one of over a hundred different protagonists who then go on a series of adventures against the computer, all the time trying not to die. It lives somewhere in between the games of Talisman and Top Trumps. 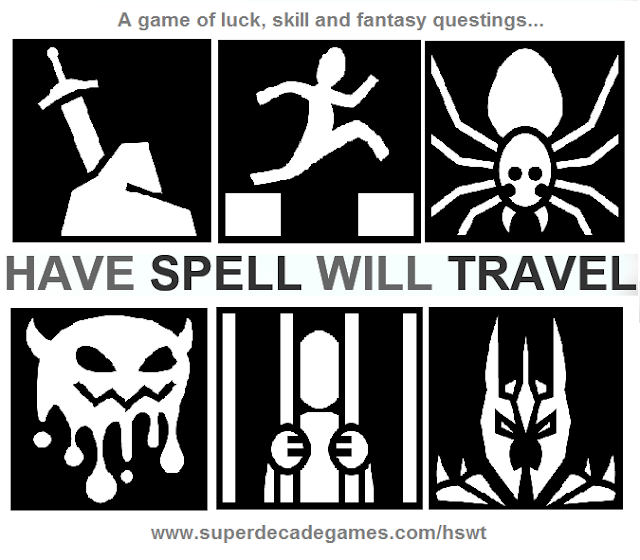 Thanks to some feedback from players I have reduced the cost of various items in the village. You can now stock up on magic potions at a much cheaper price.

There are also a number of new challenges to get you going, including an endpoint to the dungeon. There are several new items to discover, but I wont say much about that so as not to spoil the surprise of finding them.

So, if you have some time to kill, and you feel like getting killed by fantastic beasties in a fantasy setting, then do check out Have Spell Will Travel now! 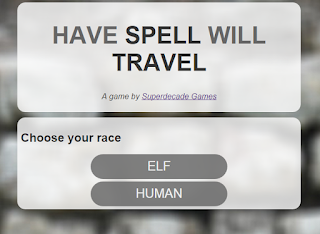 
There you will find almost daily updates for all manner of geeky boards from Computing Science, LEGO, algorithms, Science fiction and fantasy to some rare photos of invisible things. So if you have nothing better to do, I'll see you over there.

Previously, my media center revolved around using Music on Console on my Raspberry Pi. The music files were stored on a networked drive and the output of the Pi fed into my stereo amplifier which freed the monitor for use with either my BBC microcomputer or my Windows 10 computer.

I really like this set-up as I could control the music player by pressing keys on the keyboard without having to switch the monitor to the Raspberry Pi channel. For example 'pause' is the spacebar, and 'next tune' is the 'N' key.

More recently my Raspberry Pi stopped working properly (I'm not sure what the problem is, suffice to say that the OS no longer responds to mouse clicks correctly). I needed some time to rebuild the Raspberry Pi, so I switched to another media center app.

Microsoft Groove for Windows 10 seemed like the logical choice as it could see the same files on the network as the Raspberry Pi (a collection of several hundred GB of files painstakingly ripped from CDs since the early 1990's). I had used Groove several times for playing music before, however the Pi was my previous main system.

My first impressions were of a really well-designed user interface that was simple to use and beautiful. The app had already found the music files from the network and had even loaded my playlists created on the Raspberry Pi and so I was up and running in a matter of seconds.

Things got better when I got my free trial of the Groove Music Pass which unlocks literally millions of tunes ad-free. I have been having tremendous fun building new play lists from forgotten classics as well as new music. Groove has a radio feature that lets you discover new music based on any artist that you may care to mention, and, of course, download or curate new music into whatever playlist you like.

The service runs on my Windows Phone as well as my Android devices, which is another boon as I can have access to my playlists at work and on the go, but also, rather crucially for me, it frees the monitor so I don't miss any of the retro-computer action on my BBC micro! There is also a web-player so I can access the service on my Chromebook or, if I really have to (and I mean if there is literally no other device available with a power supply) I can get it on my iPad (shudder). But this is a rare thing as I usually use this device to chop onions.

A really nice feature is that I can control the player on my phone with my Microsoft Band 2, which I still love even though Microsoft seem to have forgotten all about it. Cortana on desktop also responds to voice commands ("Hey Cortana, play some metal!") and I understand that more voice commands for Groove a due in the next large update for Windows 10 next April.

Microsoft is keen for you to sync your music with your OneDrive account, and a purchase of the Groove Music pass comes with a very generous 100GB of OneDrive storage. 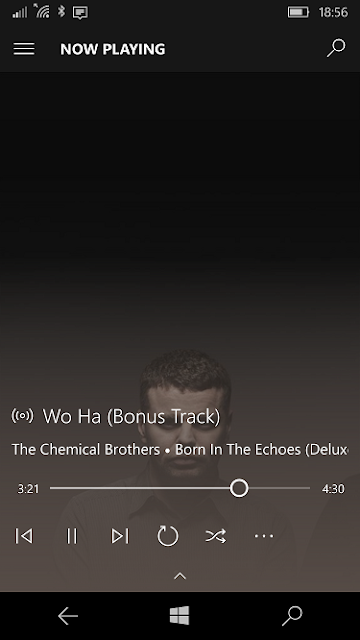 Well, that's it for today. I'm off to listen to some new music and chop onions on my iPad.
Subscribe to: Posts (Atom)